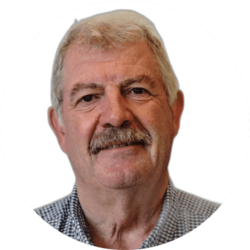 John's first foray into Bowling Club committees first came in 1994. He then went on to become Secretary, Treasurer, and President, and has served for over 25 years. His club has honoured him for those services having been bestowed as an Honorary member.

Aside from his club positions, John has been his county league Match Secretary and is currently the President of his County organisation.

In 2001, John was elected as a District Secretary of what was then the Scottish Bowling Association. With the birth of BOwls Scotland, in 2010, he served as a Director on the Board from 2011-2012 and as a member of the Rules Committee and Competitions and Events group.

If that all wasn't enough, John has been involved in the British Isle Bowls Championships (BIBC) for over 10 years and has assisted in managing the annual events. John has also managed the Bowls Scotland BIBC Championships players.

John is currently a member of the Scottish Bowls Umpiring Committee which oversees Umpire training and examinations in Scotland.

He was elected President of Bowls Scotland in 2019.