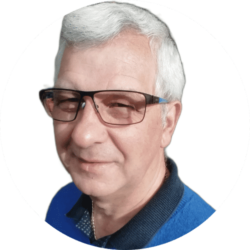 An ex-Police Officer, who throughout his career gained vast experience in formulating strategic plans, coordinating, managing and delivering projects in a professional and efficient manner. This included building strong partnerships across varied sectors with an ability to influence and work with stakeholders and senior decision-makers.

In the world of bowls, Bob has held a number of key positions in the management and progression of bowls organisations. Aside from holding various committee positions in his home club, including secretary, match secretary and president for over 20 years, Bob has held, various posts in controlling bodies, including -

During his tenure as a Director of Development with Bowls Scotland, was responsible for working closely with other directors to promote the sport at local, national and international levels, overseeing a new coaching award programme, Try Bowls events.

Contributed to Bowls Scotland strategic planning and growth to make the organisation a modern, professional and well-governed sustainable sport available for all to access.

Appointed Bowls Scotland Para Head Co-ordinator 2019 having been involved with Disability bowling for around 10 years.

Bob is no slouch when it comes to the playing side of lawn bowls.....